You are here: Home / Life in General / Are you offended? 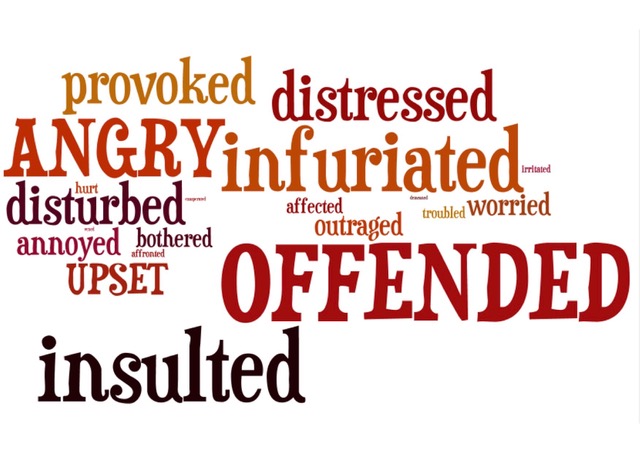 Are you easily offended? Do you shudder when the speaker misuses the verb “to lie” – as in “ . . . she went upstairs to lay down”? My late Mother always corrected us, saying, “Hens LAY eggs. People do NOT.” Do you believe that all Universities should have “safe spaces” to avoid offending the sensibilities of sensitive students who have to be protected from extreme speakers. I thought that the whole point of University was to be exposed to controversial views and to learn how to challenge them.

While half-listening to the radio the other day I heard a speaker protesting vehemently how offended she was by a stand-up comedian who adopted the persona of “a working-class black woman.” She felt so offended that she wanted the comedian stopped. I kept trying to get my head around this. I was unsure which bit offended her: the dressing-up as a woman or the mimicking of someone working-class or pretending to be a person of colour? Comedians have often picked on stereotypes for their humour. In the days of naughty postcards it was tiny hen-pecked husbands and large bosomed bossy wives. If you were offended you just did not look at or buy them. Actually, I am not happy when comedians start with the lines “There was an Irishman, a Scotsman and an Englishman . . ..” or similar, using racial stereotypes to mock in the pretence of being funny. It isn’t. Nor am I happy with the use of smut. Being smutty is not being funny – nor is the liberal use of four-letter words. But am I offended? No! I just do not listen. After all, so much of “being offended” is the way we perceive things. It is most worrying that nowadays youngsters can get offended merely by the way someone looks at them. The sheer arrogance of assuming that anyone looking your way is actually focused on you! And then to act on the perceived offence by retaliating with violence is out of proportion and totally unfair. Oh yes: Christmas. Do not get me started on Christmas and nativity scenes. When did it become trendy to declare, “Oh we can’t display a Nativity scene in our shop window, it might offend the Muslims.” I often wonder how offended I would be if someone declared on my behalf that they could not do something because “it might offend Christians”. I would be furious. Absolutely furious. How dare they?

Someone with their face covered really bothers me. While they are free to stare at me, I have absolutely no means of judging their facial expression. Does that mean that I am offended? No, more appropriate to say that I feel really threatened. Then there are the parents who install their precious offspring on the only vacant seat on the bus and remain standing themselves. Or, worse still allow their offspring – who are travelling free or half price – to occupy seats while adults stand. What kind of lesson are those children learning? This behaviour does offend me because it is not allowing children to learn consideration and respect.

So much of “being offended” is in the mind of the beholder. “I don’t like it” “It offends me” “It bothers me” “It annoys me”. There we go: me! Me! Me! The lament if the 21st Century. This is the “me” generation. “I am entitled . . . ” But, since offence is one person’s interpretation and in their own mind why do we make it such an issue? Is it not up to everyone of us in society to behave sociably and “do as we would be done by“? If it causes us offence then we must ensure that we think twice about not exhibiting behaviour that is offensive to others. And we must learn when to be judgmental and not jump to conclusions. That person looking in your direction has not even seen you – they are looking behind you. No way should you be caused offence by the way they are looking. That comedian playing a stereotypical character is not trying to offend you – just trying to earn a living. You do not have to watch/listen! We all need to be more tolerant, respecting others and behaving with consideration.

Blessed with a happy disposition inherited from my Grandma, I am determined to enjoy life and to grow old disgracefully. A life-long learner, I am passionate about … END_OF_DOCUMENT_TOKEN_TO_BE_REPLACED